It’s time for our October update! It’s always busy here at Sans Vertigo, and I’m always left feeling that there aren’t enough hours in a day to get everything done.

The past couple weeks have seen some hot, dry days. In the coming spring/summer season I may need to pay special attention to weather conditions before sending out parcels containing live goods. The heat is much less forgiving than the mild winters we have in Australia on fish, shrimp, plants and insects. As a rule, I avoid sending out live goods if temperatures are forecasted to have highs above 33C for more than one day, and we are now brushing close to that. There are some select live items that cannot be shipped 29C and above.

We’re working on a few videos, but didn’t have as much time to flesh them out this month. This month’s featured video is from our “Best colour substrate for ____ Shrimp” series, focusing on black coloured neocaridina. I hope these continue to serve curious hobbyists well!

A few months ago I decided to start sending our flightless fruit fly starter cultures with agar mixed into the medium after one failure where the postman had shaken the parcel hard enough to dislodge the normal lab medium, making a mess and killing the flies. I was hoping that the agar would set the medium solid as one piece to the bottom of the cups, avoiding this issue. It did work quite well for a bit…

… But then I started to run into issues. At first, only occasionally there were failures where the agar seemed to liquefy in the mail, drowning all the flies. Then in October, when the weather was warming up it became more often and in one instance an entire batch of cultures going to several different people had totally failed to stay solid! It was a very expensive mistake. Thanks to Wendy for this photo of DoA.

The sudden rise in deaths on arrival was enough to learn which method to use. I’ve decided to go back to the old method of normal lab medium, but this time packing extra wood wool to keep the medium down should postmen get too rough. All the feedback received has been helpful to improving the way we ship fruit flies- so I would like to thank you all.

On my long list of things I wanted to do is hobby merchandise. It is something as a hobbyist I desire but have difficulty finding any with the appeal to younger generation fish and invertebrate keepers, like myself. I’m making shrimp charms for keyrings and phones, which I hope will be ready in time for the Christmas season. This will be new to me, so the first run will be small. The profits from these charms would be put back into making more merchandise and funding the “Freshwater Fish of The World” colouring card project. The card project is nearing completion, but the printing costs are very high for the 50 unique cards featured. We may end up printing, trimming and packing everything ourselves to start off.

Here’s a little sneak peak of things to come! Mock ups of our first set of designs! Testing out compatibility of the ink and paper with different colouring tools.

Any long time readers might recall that at the beginning of this year I had bred my False Garden Mantises and kept their ootheca (eggs). These eggs seemingly had gone into diapause, ceasing development over the cool winter. Now it is warming up and I’m checking on the ootheca every day for the emergence of young mantids. There’s a part of me that worries that none of the ootheca laid by my mantis will result in any young. I gave my mantises a chance to mate multiple times before old age took them, so I hope that the efforts didn’t go wasted. I’m hearing of many people around me having their ootheca hatch unexpectedly this month. So for now, I keep them under artificial heat should it become cool in our room and anxiously wait. On a little side note our living resident mantises seemed to go on a little developmental break over winter too. It has been several months since any of our mantises moulted. My oldest male has been a subadult for over 6 months now! He is over a year old and still not get an adult, he’s expected to be a bit long lived for a male mantis at this rate. 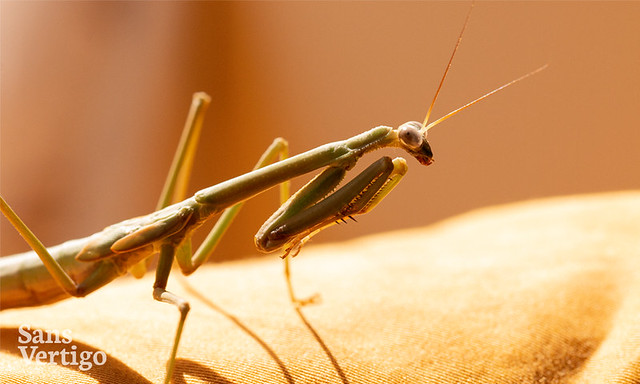 With Christmas and the end of the year looming upon us, I feel the pressure to get so much more done before the year is up. But there are many things I can’t rush no matter what- there’s not much I can do about forcing an animal or plant to grow faster than it already can!